On my interview on Truman’s Town Hall last week I made a few claims.

Namely, I made the following three claims:

I don’t want to just assume I’m right, so instead, I’m going to see if I can find evidence that my assumptions are correct.

My first claim was that there was a church, somewhere in the United States, that tried to house homeless people. However, they got in trouble because they don’t have a permit.

Back in 2016, Patapsco United Methodist Church in Dundalk, Maryland (around Baltimore) faced a $12,000 fine for allowing homeless to sleep on church property.

Here’s a couple of sources:

And here’s an old reddit thread (that was submitted on December 22, 2016) about the situation.

More recently, there’s an article about how In Dallas, Churches Break the Law to Shelter Homeless People on Freezing Nights. This article was written on December 17, 2019, in The Texas Observer; it doesn’t seem to indicate that those churches actually faced any fines or other governmental actions.

And there’s Denison Avenue United Church of Christ - just north of us in Cleveland, Ohio - faced action from the city for housing the homeless.

My second claim was that there was a church in Dayton that was instructed by the government to stop feeding the homeless because the church did not have a permit.

I seem to remember that this church was on Third Street and that the warning they received was in the form of a pink printout taped to their front door.

Alas, I searched but could not find a reference to it.

That said, feeding the homeless is illegal in some places.

My third claim was in regards to the traffic on Old Troy Pike/202. Specifically, I stated that there was a higher-than-normal amount of accidents at the Old Troy Pike/Taylorsville intersection.

On Ohio’s Crash Retrieval Database I was able to find, for January 2020, 56 accidents reported by Huber Heights Police.

Searching these was quite tedious as most are not searchable by location. The best I could filter by location was by reporting agency - in this case, Huber Heights Police. The result table did have a sortable “location” column, but most of these were blank: 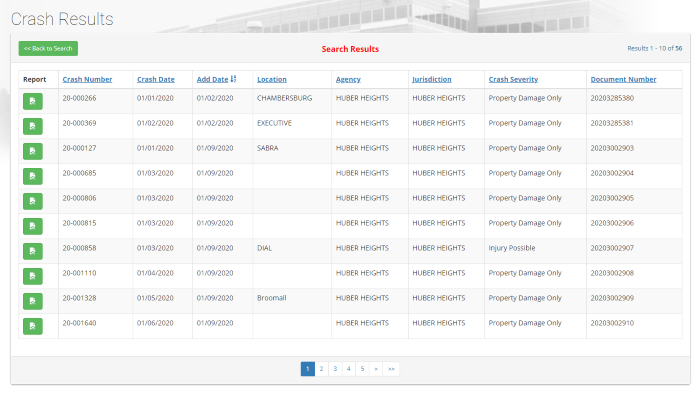 So, for each crash row without a “location” value, I had to open the actual crash report to see where it happened. As you can imagine, this was quite tedious. Also, I’m pretty sure the system wasn’t designed to open multiple reports at once - I’m not 100% sure, but I think occasionally it opened up the wrong report (basically, one I had already opened in another tab).

The crash numbers I found for the above mentioned intersections are: