I have one last thing to say on the March 15, 2021 City Council Special Meeting and then I will make like Elsa and Let It Go.

I mentioned metadata - that the contract was, according to the metadata in the PDF document that was provided to me via a public records request, created and modified February 6th, 2021 at 4:52:59 AM.

The law director stated that this was most likely due to him copying the Consultation Agreement from what he wrote in February for Vandalia. (I think he said for the Vandalia City Manager, but I may be remembering wrong.)

(The entire meeting video can be viewed on the City’s Official video site.)

The issue with this claim is that the moment he modified the document - say, by replacing the Vandalia individual’s name with Mr. Schommer’s name - the metadata (at least the modified date) would update to whenever he updated the document. It would not reflect a previous document.

(The fact that the creation date is the same as the modification date suggests that the document was created once and never modified.)

If the law director’s claim is true, he should be able to create a new document using the same template he used to create Mr. Schommer’s agreement with new text, and that document would have the same metadata date as the agreement.

To prove that he updated a new document, he could write into the document a current headline. 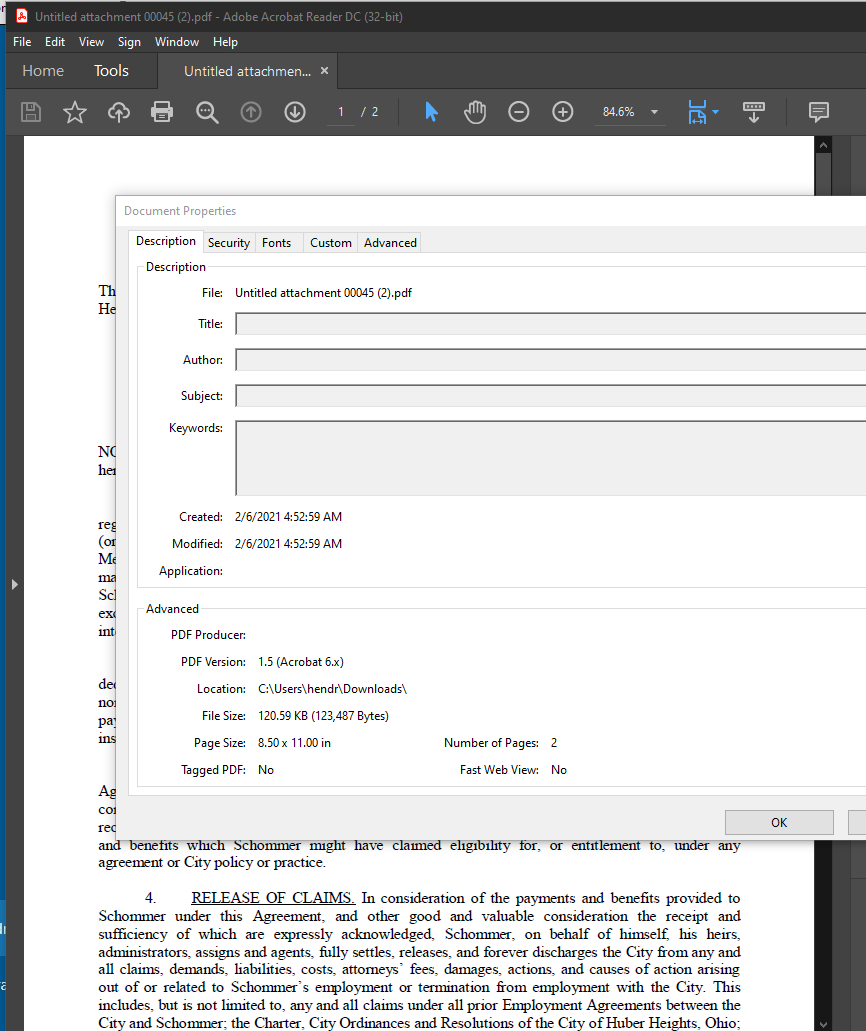 Here’s a Google Drive folder with the documents.

One PDF (the original document I requested - it’s named “Untitled attachment 00045.pdf”) wouldn’t open with Adobe Acrobat, so I had to run it through a repair utility.

I put the actual “corrupted” PDF file in a subfolder called “corrupted” since you can’t have two files with the same name in the same folder.

If that’s the correct create and revision time, then that suggests I did not receive the original document as requested.

I’ve also put the documents here on this site:

Interestingly, my request isn’t showing up in the city Public Records Request portal. My first thought was that they hadn’t got around to it. However, I was able to look up the request using the Tracking Number and my email.

The docs are available on the portal if you know the URL. The URLs are:

Oddly, the original document I was emailed had a PDF extension, where the document above has an RTF extension. (Also the filenames are very different.)

I’m curious as to why they would change the filename extension when it was emailed to me.